Home/Oral Health/Mystery Solved: The Story on Canker Sores
Previous Next

Canker sores, also called aphthous ulcers, are small, shallow lesions that develop on the soft tissues in your mouth or at the base of your gums. They can be painful and can make eating and talking difficult. 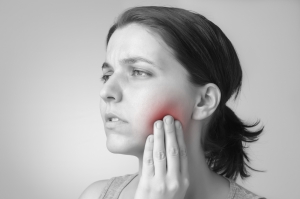 Although anyone can develop canker sores, they occur more often in teens and young adults, and they’re more common in females. Often people with recurrent canker sores have a family history of the disorder. This may be due to heredity or to a shared factor in the environment, such as certain foods or allergens.

What are the Symptoms of Canker Sores?

Most canker sores are round or oval with a white or yellow center and a red border. They form inside your mouth — on or under your tongue, inside your cheeks or lips, at the base of your gums, or on your soft palate. You might notice a tingling or burning sensation a day or two before the sores actually appear.

There are several types of canker sores, including minor, major and herpetiform sores.

Minor canker sores are the most common and:

Herpetiform canker sores are uncommon and usually develop later in life, but they’re not caused by herpes virus infection. These canker sores:

The precise cause of canker sores remains unclear, though researchers suspect that a combination of factors contributes to outbreaks, even in the same person.

Possible triggers for canker sores include:

Canker sores may also occur because of certain conditions and diseases, such as:

Are Cold Sores and Canker Sores the Same Thing?

How Are Canker Sores Treated?

Pain from a canker sore generally lessens in a few days, and the sores usually heal without treatment in about a week or two.

If sores are large, painful, or persistent, your dentist may prescribe an antimicrobial mouth rinse, a corticosteroid ointment, or a prescription or over-the-counter solution to reduce the pain and irritation.

You should call your dentist about canker sores if you have:

Can Canker Sores Be Prevented?

Although there is no cure for canker sores, and they often recur, you may be able to reduce their frequency by:

Talk with your doctor to determine if you have any specific vitamin or mineral deficiencies. They can help design a suitable diet plan and prescribe individual supplements if you need them.

About the Author: John Healy